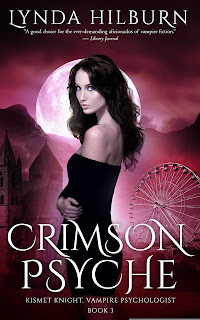 
All three novels in the Kismet Knight, Vampire Psychologist series are available in ebook and print form through Amazon.com


“Welcome back, Denver! Carson Miller here, host of Wake Up, Denver!, WOW Radio’s top-rated talk show. We’re continuing this week’s theme of whacked local celebrities. Is it just me, or is Denver crazier than ever?” His laugh sounded like a rusty chainsaw.


What the hell? Whacked local celebrities? I agreed to come and counsel his listeners!


“I’ve got self-proclaimed vampire psycho – oops, I mean vampire psychologist – Doctor Kismet Knight in the studio with me today. She’s ready and willing to answer all your bloodsucker questions. Give us a call. The phone lines are open. Welcome, Doctor Knight.” He gave a wide, tobacco-stained smile.


“Thanks, Carson.” I spoke into the microphone on the long folding table in front of me. “I’m happy to be here.” Barely catching myself before I tacked a question mark onto my response, I adjusted my headphones and peered around at the unexpectedly low-tech, dungeon-like studio.


Piles of newspapers, men’s magazines, CDs, DVDs and promo flyers fought for supremacy against empty pizza boxes and Styrofoam coffee cups. Fast food bags overflowed the trash can. The pleasant decor and posters of contemporary talk-show personalities on the walls in the outer office hadn’t prepared me for the primitive reality of Carson World.


As he read an ad for an auto parts store, I inched my microphone further away from his, noting the long cord curling at the base of the stand in case I needed to put even more space between us, and scanned the electronics in the engineer’s booth. Not only was the equipment modern, but through a glass wall I could see yet another studio on the far side of the booth, and even from here that one looked to be state-of-the-art. Why would the station stick Carson in such a miserable hole?


He rotated his head in my direction and wiggled his eyebrows, still talking into the microphone. “Let me start by saying that you look finger-lickin’ good this morning, Doc. Seriously babe-o-licious.” He ran his thick, lumpy tongue slowly around his lips in a horror-film version of what I supposed he thought was a sexual come-on.


“Uh, thanks?” I couldn’t quite squelch the question mark this time. I studied his stained, too-small T-shirt and unfashionably torn jeans. His voice, which had sounded pretty sexy through my car radio, wasn’t even close to being an accurate representation of the man himself.


“And now that I’ve eyeballed the merchandise, I’m going to do my best to talk the Doc here into taking off her clothes before the show’s over. Then I’ll post photos on my Facebook page,” he said, laughing at my alarmed expression.


“I don’t think so.” Oh, great. Another Howard Stern shock-jock wannabe, except fat and bald – what is it with all these talk-radio assholes? Miserable-hole question answered. At least I’ll get a good case-study article out of this experience: Demented, Aging Radio Hosts and Mental Illness. “We can take that option off the table.” I glanced at the door that led from our tiny sound booth to the engineer’s studio to calculate how many steps it would take me to escape.


“Don’t be so sure, Doc. I can be pretty persuasive when I put my mind to it.” He pointed at the engineer, who hit a sound effects button and filled the airwaves with loud clapping.


Young spectators were visible through a large window, lining the hallway and blocking the exit. They high-fived each other and bumped fists, laughing at something I was obviously not cool enough to understand.


Does he have those fans jammed in there on purpose to keep me from leaving? He probably does. What a creep!


I caught a movement from the corner of my eye and shifted my gaze toward a young male who’d materialized, stepped through the bystanders and sauntered over to stand next to me.


Perfect. A haunted radio station. Just what I need.


The slender man wore a glittery jacket with bulky shoulder pads and sported spiked 1980s hair. He grinned and saluted me with a beer can.


“Ladies and gentlemen,” Carson continued, “I have to tell you that it’s a shame we aren’t on TV because Doctor Knight is a feast for the eyes. She’s wearing a clingy black dress that hugs her curves in all the right places. Legs that go on forever. Big blue eyes. And she’s got this great long, dark hair.” He reached out to touch my curls and I smacked his hand away. He lowered his voice and gave it an extra layer of smarm. “It gives a guy ideas, if you know what I mean. Anyway, Doc” – he returned to me – “so what the hell is a vampire psychologist? Are you a vampire?” He laughed and his belly flopped against the table, making the microphone wobble. When he moved, the smell of cigarette smoke wafted from his T-shirt.


“No, Carson, I’m not a vampire.” I scooted my chair and microphone even further away from the host, tilted my head and attempted a professional smile while I focused on his ridiculous question. If he only knew. “I’m a psychologist who works with the subculture of individuals who believe they’re vampires. Or who want to be vampires – people seeking meaning through role-playing and exploring the dark side of themselves – the unknown – and by flouting society’s ideas of good versus evil.”


“Wow, Doc – that sounds pretty sexy,” he oozed. “Are you saying that Denver has a lot of these people? These ‘pretend vampires’?” He reached one of his hands out toward me, making grabbing motions.


I shoved it away, giving him the evil eye.


This moron’s not going to rattle me. I’m here for the listeners.


He waved three fingers at the engineer and a chorus of “Carson! Carson! Carson!” burst from the speakers. Then, while the voices raved, he laughed and pointed to the microphone, expecting, or maybe daring, me to continue my interview despite his obnoxious behavior.


I glanced at the studio clock on the wall, imagining pushing my way through the crowd at the door and regretting the fact that I’d agreed to be a guest for an entire segment. In retrospect, I definitely should’ve done more research to determine which media appearances would actually help my career, which ones had disgusting hosts, and which shows just wanted to exploit the fact that I’d been involved in a heavily reported serial murder investigation – a case dubbed the vampire murders – six months earlier. Who’d’ve guessed finding blood-drained bodies would generate so much interest?


Carson sliced his finger across his neck, signaling the engineer to stop the chant, then said, “Hey, Doc, wasn’t somebody killed in your office a while back?”


“There was a death, yes – but I’m sure your audience would rather have me address their personal issues as we agreed.” I stared at him until he smirked and pointed to the engineer, who pressed another button on his console, unleashing the sound of a roaring crowd.


I wasn’t about to discuss the death in my office – very few people knew the truth: that the perpetrator had been a mentally defective vampire, diagnosed with what used to be called Multiple Personality Disorder, and whose rotted corpse finally sloughed off his immortal coil a few weeks ago. Those select few who did know included one Denver police lieutenant, one cocky FBI agent, a bunch of vampires, a half-undead psychologist colleague, a transgendered hypnotherapist and me. Everybody else believed the cover story about a mortal perpetrator.


’80s Guy bent close to Carson and waved his hands in front of the oblivious host’s face.


I’ll just ignore the Billy Idol clone, and he’ll get bored and go away.


The sound effect stopped again, leaving empty air, and after a moment Carson realized and jumped back in. “It seems the Doc here needs more coffee – she’s a little slow on the uptake this morning. Okay, so let’s go to the phones. Studio lines are open.”


He gave me an innocent smile and shrugged, as if to say I shouldn’t hold him responsible for his radio persona. I notched up the ice content in my glare and pushed my chair back a couple more inches.

Maybe he’s off his meds. Or he has mad cow disease.

Posted by Lynda Hilburn at 9:46 PM